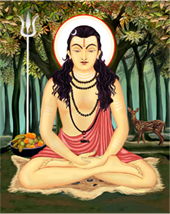 Traditions and legends concerning Goraksanath are widespread and extensive. Nepal the United Provinces,Bengal,Western India,Sind and the Punjab each has a large collection.Some of the legends about Shri Goraksanath are given below:

1) The sprititual descent of Goraksanath is recorded in several places. All of these paramparas agree in placing before him two teachers, Adinath and Matsyendranath His followers frequently refuse to give the time and place of his origin because they consider him as superhuman. Nevertheless, statements are made concerning his movements in this age. The Nepalese hold that he came to Kathmandu from the Punjab, or at least from beyond the borders of their Kingdom. And he is said to have lived near the temple of Pasupatinath in Kathmandu. He is also claimed as a saint of Oudh.

2) Some Nath saints say that their sect existed before the world came into being. Their story is that when Visnu emerged from the lotus at the creation of all things, Goraksanath was in Patala. Visnu terrified at the waste of waters, went to Patala and implored the aid of Goraksanath, who, in pity for the deity, gave him a handful of ashes from his eternal fire (dhuni) and said to him that, if he would sprinkle the ashes over the waters, he would be able to create the world. It happened as Shri Goraksanath had promised, and then Brahma, Visnu and Shiva became the first disciples of Shri Goraksanath.

3) In many places Goraksanath is looked upon as more than a human teacher, outside of the ordinary laws of time, who has appeared on the earth in different ages (yuga). He is said to have lived in the Punjab at Peshawar, beyond Lahore, in the Satya (Krta) Yuga; at Gorakhpur in the Treta Yuga; at Hurmuj, beyond Dwaraka in the Dvapara Yuga; and three months journey west of Gorakhpur at Gorakhmari (Gorakhmandi) in Kathiawar in the Kali Yuga.

4) Current tradition makes Matsyendranath the teacher of Goraksanath. In the Shri Goraksanath ki Goshthi of Kabir Goraksantah speaks of himself as the son of Matsyendranath and the grandson of Adinath.
Although Adinath may have been a Yogi preceding Matsyendranath, he is now identified with Siva and the name is used in an attempt to trace the origin of the sect to the greatest of Yogis, the god Siva.

5) Much human interest centers around Matsyendranath, who is close to Goraksanath. He is the guardian deity of Nepal, presiding over the destinies of the kingdom. He is considered as a Buddhist saint, as an incarnation of Padmapani,or as Avalikitesvara. He evidently belongs to some place outside of the kingdom, for he is said to have come to Nepal at the command of the Buddha. It is said that Aryavalokitesvara Padmapani Bodhisattva taught Siva the Yoga. On his way home, after having received his instruction, Siva explained the doctrines to Parvati at the seaside. She fell asleep while Siva was speaking, but Lokesvar heard it, disguised in the form of a fish. He is consequently known as Matsyendranatha.

6) Another legend tells how Matsyendranatha was brought into Nepal from Kapotal Parbat in Assam, to save the country from a twelve years drought which Shri Goraksanath had brought on.

7) There is a legend that gives Matsyendra a place in the Hindu social order. A Raja, Udhodhar, who lived in the Satya Yuga was exceedingly pious. At his death, his body was cremated, but his navel did not burn. This unburnt portion of his body was cast into a river and was devoured by a fish, which later gave birth to Matsyendra. By reason of having been a good man in his previous life, he became a saint.

8) In one legend Matsyendra is represented as going to Ceylon where he was enamoured of the queen of the land. When Goraksanath heard of the fall of his master, he went to Ceylon in search of him. He found his teacher in the halls of the court and called him to account. Matsyendra then left the queen, but took their two sons with him. They afterwards became Parasnath and Nimnath, founders of the Jain religion.

9) In a Nepalese version of one story, Matsyendra, by means of his powers of Yoga, left his body in the care of his disciple, Goraksanath, and entered that of a king, just dead. In this situation he fell into temptation. Luckily, Goraksanath, who was watching over his body, recalled him to his senses and the teacher returned to his own body.

10) Further, Kabir (1440-1518), to whom Nanak was largely indebted for his teaching, is supposed to have been a contemporary of Goraksanath. In the Goraksanath ki Gosthi is recorded a controversy between Kabir and Goraksanath. It was on the basis of this reference that Wilson assumed that Goraksanath belonged to the fifteenth century.

11) Another cycle of Panjab legends, those of Raja Rasalu and his half-brother, Puran Bhagat, is intimately concerned with Goraksanath. Rasalu's name is famous from Afghanastan to Bengal, and Puran is one of the most famous saints of the Panjab. Both became followers of Goraksanath, and Puran, especially, became a renowned Yogi. The well where Puran was left for twelve years, is still shown in Sialkot. Rasalu was the son of the famous Salavahan of Sialkot.

12) There is another cycle of legends, centering around Gopicand, Rani Pingla, and Bhartrhari (Bhartri), which is repeated.from Bengal to Western India and Sind and which is not unknown in Punjab. The mother of Gopicand, Manavati, is spoken of as the sister of Bhartrhari. who abdicated his throne in favour of his brother, Vikramaditya (Candragupta II) of Ujjain, after the death of his queen, Rani Pingla. Bhartrhari (Bhartri) became, a Gorakhnathi.

Considering the various legends and data it may be assumed that Goraksanath lived not later than 1200 AD.