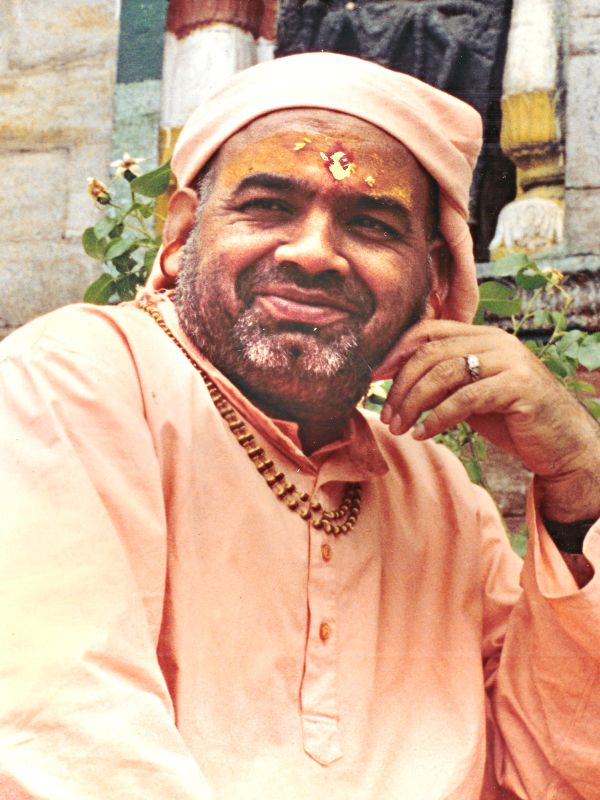 At present Sri Narahari Nathji holds the office of the head of the ašrama. He is in the fifth generation of the Divine Saint Shri Amrit Nathji Maharaja. This young Mahant is an epitome of spiritual brilliance. He is capable, virtuous, restrained, firm in conviction and committed to action in the saffron robe.He was born to Shri Omkara Mala Purohit (a member of priestly clan among Brahmanas) on the eighth day of the dark aspect of Bhadrahpada in the year 2009 of V.E., in the village ROSAVAN, near Fatehpur.His parents were simple, virtuous, free from caprice and malevolence and lived a life of honesty. The family lived in Fatehpur for the sake of livelihood. The father had a deep reverence for the ašrama and often visited it for the company of the saintly and pious persons and for the service of the sages.

Shri Narahari Nathji, though a young child, used to accompany him to the ašrama out of inquisitiveness. The purity of environment of the ašrama influenced him deeply. Often he used to loose the awareness of the cord that binds the young hearts with their parental homes. Perceiving his sense of detachment, sincere faith in God and the temper of his inner self Sri Subha Nathji Maharaja willed to take him in the fold of the ašhrama. He found him a person of genius showing unusual prospects. His father also felt inspired and readily agreed to present him to the sect and the asrama. In the year 2020 of Vikrama era on the auspicious occasion of Jyoti Nath Mahotsava, in compliance with the words of Shri Šubha Nathji Maharaj, Shri Hanuman Nathji accepted him as a disciple. He was only 10 at that time. In that tender age he gave up family living and became a hermit. He fully involved himself with the daily routine of the ašhrama. As soon as he entered the life of the ašrama, the innate tendency of detachment sprouted and began taking over his whole being. He showed an inclination for the life of action and service in preference to the austerity observance for self-realisation in solitary situation. The life of action opened the line of sahaj Anand, the line of least resistance. He was sent to Chamadiya School for education. Having completed the preliminary course, he began devoting his full time to the routine duties of the ašhrama. He did not find the school learning of much interest.

Seeing that his inner being was totally dedicated to the ašrama life, full responsibilities were entrusted to him at the tender age. In the light of proper guidance, he developed the capability of carrying out assignments successfully. The inmates of the ashramas were deeply impressed at his unwavering dedication, efficient working style and gentle behavior. His nature pleased everyone. With changing times, the ašhrama life also gathered speed.

He was entrusted with the responsibilities of procuring implements for irrigation and farming. He carried out the responsibility very efficiently. He learnt all the techniques of electrical fitting, driving the machines and their repairs. All this he learnt out of practical experience. Irrigation equipments, implements and other paraphernalia, such as sprinklers, were procured and provided. They were connected to the nearby well. Besides, he was awarded several times for the higher yields.

The awards were given at the time of annual fairs, organised by the centre for the advancement of new agricultural techniques among the farmers. The centre used to organise fairs and exhibitions for this purpose. He shouldered this heavy responsibility very efficiently and very effectively. That was the time when his preceptor Sri Hanuman Nathji became ill. His disease was incurable. Shri Narahari Nathji single mindedly dedicated his faculties to his service but inspite of all the efforts, he could not be saved. Shri Hanuman Nathji had realised that he would not be saved inspite of the treatment and dedicated service by Shri Narahari Nathji who, besides looking after the multifarious responsibilities under his charge was leaving no stone unturned to save his preceptor. He wrote a will in his favour conferring all powers and privileges on him, his favourite disciple, Shri Narahari Nathji, and making him the head of the ašhrama. This he wrote on 18/2/1982. On the basis of this will he was declared the successor to Shri Hanuman Nathji and the head of the Ashrama. The will was confirmed on 25/7/1982.

On 25/8/1982, Shri Hanuman Nathji, breathed his last. A huge number of people, devotees, Yogeshwares and saints thronged the Ašhrams for his last vision. In accordance with the canons of the sect, he was given Samadhi. The twelfth day rite was held on 5/9/1982 Brahmans were invited to the feast and were presented with stainless steel plates. All rites were performed meticulously and with generous heart.

On this occasion Shri Naraheri Nathji was invested with the authority and office of the head of the ashrama, in the gathering of heads of the sect, respectable gentry of the town and faithful devotees of the ashrama. At that time the radiance of the splendor was full of charm and effect. Every particle of the ashrama was emitting happiness and joy. After the demise of the gross body of Guru Maharaj, he shouldered the heavy responsibility of running the ahrama. In spite of many obstacles, he is discharging his responsibilities with courage and dedication successfully.

The spirit of devotion among the people is increasing steadily because of his religious fervour. He is organising sessions of Shrimad Bhagwati Saptah (Seven days function) and various other rituals which go a long way to leave an impact on the minds of the believers. In accordance with purport of the dictum that cleanliness is next to Godliness, he is actively given to the mission of keeping the ashram environment neat and clean - physically, ethically and spiritually.

Because of this, visitors and pilgrims enjoy a feel of peace of mind, which they did not do anywhere earlier. He remains constantly busy mentally and otherwise - to lift up the intellectual and physical setting of the ashrama. This is because of his creative fervour. He constructed a sanctum which is dedicated to the memory of Shri Hanuman Nathji. He got it bedecked with marble slabs having embellishment on them. Adjacent to this sanctum is a verandah. There are paintings on the walls of this verandah depicting the events of the holy life of the revered sage, Shri Amrit Nathji Maharaj. These paintings enhance the asesthetics of the architecture. Pilgrims, visitors and devotees are attracted to the paintings. Besides, there stands a temple of Lord Siva at the main entrance gate of the ashrama. This temple is exceptionally beautiful in respect of architecture and designing. Just in front of the ašrama, on the other side of the main road, a big, impressive and spacious guest house has been constructed. Here all modern facilities are provided for the visitors. At the back of the ashrama there was a thorny hedge to mark the boundary of the ashrama. This has been replaced by a pucca fencing wall. The wall has stopped soil erosion. 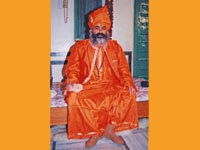 He remains busy with implementation and execution of the plans of new construction. Yet, he has always been thinking for the enhancement of the prestige and dignity of the ašrama. Presently, he is the vice-president of the Yogi Maha Sabha, which is a position of dignity. He is seriously engaged with the programmes of the upliftment of the honor of the Sadhu Samaj. His brilliance and spirit of service are worth appreciation.

Every year he visits Hardiwar for a holy bath in Ganga. There he encourages the spirit of devotion among the Yogis. They look up to him and his acts of benevolence as a source of inspiriation. He also went on a pilgrimage to the temples of Pashupati Nath in Nepal and Vishwanath at Varanasi. The devotees welcomed and honoured him there. He visited many shrines in the country. SS This way he is maintaining to the holy tradition of the Amritšrama. He held a conference of saints and organised a general feast (Bhandara) in the honour of the Holy Gurus Shri Amrit Nathaji, Shri Šubha Nathji and Shri Hanuman Nathji. The feast continued from 15/11/1989 to 18/11/1995. This was a great congregation. The sages from far flung areas assembled in the ašrama. Yogis of 32 Dhunis attended. This was a unique occasion to have a vision of the unity in diversity of ways and styles.

He is a man of action, he is working very hard-day and night-to keep up the holy tradiation of the ašrama; his devotion is unwavering. The office of the PIR, which he is holding, is demanding, strenuous and he is doing it. He earnestly desires that the flag of the fame of the Mannath sect may fly aloft and the name of the Guru Gorakha Nath may echo and reverberate from all corners. May he succeed in his endeavors. 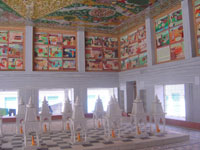