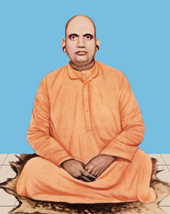 Honourable Pir, the Head of Monastery, Sri Subha Nathaji is a great yogi, pure mendicant and an accomplished soul. He is fair complexioned; he commands wide and deep influence; he bathes and swims in the lake of pure knowledge, he shines as a genius, commands great wealth and legacy of intellect, he has a heart and a faculty of discernment which never waver in the face of a trying situation; stable and noble character is his inheritance; his dealings with the people show a unique blending of the ancient with the modern; he is given to the endeavour of harmonising the extremes into oneness; his heart pulsates with soft and supporting sentiments for the suffering humanity and cares for them.

He generates a sense of devotion, faith and dedication in the hearts of the visitors, he inspires the devotees for the life of austerity and impresses upon them that the dedicated life is the real life and that the one given to the worldly enjoyment is a negation of it; such is the master of a sound physique, sound heart, impressive countenance and commanding personality, the accomplished yogi, the PIR, Sri Subha Nathaji.

The grandfather of Sri Subha Nathji was a younger brother of the Holy Sage, Sri Amrit Nathji. When Sri Amrit Nathji was 30, his father had left Bau for Bikaner. He had gone there with his family. Since then the family continued flourishing under the patronage of the Jaghirdar of Udasar. The fortunate and the blessed lady of the family, gave birth to a son who later became the head of the monastery. Udasar village and the line of the brother of Holy Sage, Sri Amrit Nathji came to enjoy the distinction of reverence which is due to the holy mendicants of accomplishment. The revered saint, Shri Amrit Nathaji had preempted the course of babys life which it was destined to take. He had foretold that a gifted soul was to incarnate in the community. Shri Shubha Nathji was born on Janmastami of the Bhadrapada in the year 1968 of the Vikram Era.

Because he was born as a blessing of the Holy Sage, he was considered the boon which the words of the sage had vouchsafed. The baby was brought to the Sage Amrit Nathji and was placed at his Holy feet. The parents of the baby offered him into his service as he was the gift of his words. As the child was only three years old, it was not possible to rear him up in the Asrama. The parents, therefore, brought him up at the village Udasara, till he attained the age of seven years. In the year 1974, an year after the Holy Sage had entered into an eternal SamadhI, the child was brought to the Ashrama at Fatehpur. As desired by the sage, he was taken into the fold of the sect. As Shri Shubha Nathji hailed from the line of the Holy Sage, from the very childhood he gave a true and good account of the qualities of his head and heart; as a gifted being, he had inherited a fabulous spiritual wealth to his credit. The qualities such as purity of heart, sense of detachment, yearning for austere living, earnest desire for spiritual accomplishment as a Yogi, bloomed from the very beginning. The environment of the Ashrama proved very conducive to this blooming. Clipping of the tuft of the hair on the head, piercing of the ears to wear the rings therein, and other rites that follow were formally performed under the observation of Sri Jyoti Nathji. So, he was the GURU of Shri Shubha Nathji.

There has been strong convention of imparting education to the inmates of the monastery Shri Amrit Nath Ashrama. Sri Šhubha Nathji was sent to the sanskrit Mahavidyalaya run and managed by Sri G.R. Chamadiya. There he completed courses in Hindi and Sanskrit. Sri Samkara Nathji has been his co-student in the Mahavidyalaya. Sanskrit education and learning, purified and refined his tendencies. He blossomed into an erudite yogi of a high calibre, enjoying the boon of a sound physique and a discerning intellect. During studentship he covered many volumes of Hindi and Sanskrit.

In the light of the knowledge, he had gained during studentship, the pearls of the experiences and perceptions, which the discerning faculty of the inner judgement gathered, shone up with a unique lustre in the coming years. He came to be known PARAMAHANSA- the liberated soul.

The PIR, Sri Jyoti Nathaji had a very soft corner for Sri Subha Nathaji. In the dark aspect of the month Phalguna, the Amrit Mahotsava was held in Fatehpur. On that occasion a large number of mendicants, Pirs, heads of Monasteries, Yogis and other ascetics of the nath sect had gathered in the Ashrama. Shri Jyoti Nathji was invested with the status and authority of the headship of the monastery at Fatehpur. Shri Jyoti Nathji was occupying a high seat on the dais. Then as a child Sadhu he was sitting on his lap. Sri Subha Nathji in that form attracted the attention of all the sadhus and others assembled there. The radiance emanting from his countenance was casting a spell of charm all around. That augured well the spiritual power that he was to wield over the followers of the Nath Sect and others in future. The hearts of the people, throbbed with ecstasy, when the vision of a child yogi on the lap of an accomplished and liberated yogi, inspired the sentiment of an overwhelming joy. In the later years Shri Subhanathji converted all his faculties and powers onto the mission of devotion to the preceptor and service of the ashrama. Sense of detachment from worldly life contributed towards the enrichment of his life with the Divine qualities and virtues. He became the medium and embodiment of effulgence of yogic splendour. And, this splendour went on widening its ambience.

The Pursuit of Self realisation and the Vow of Service :

Sri Subha Nathaji was a true ascetic. The viewers, when they looked at him, perceived the rays of the sacred light emanatingg from his each and every pore. The qualities of gentleness, sincerity and profundity, radiated from his eyes, forehead and the smiling countenance. In Amritsrama a sadhu, an embodiment of service, devotion, austerity and creative urge had emerged. With the passage of time the worldly conveniences aggregated into prosperity; alongwith it the brilliant yogic disciplines and observances, in perfect keeping with the canonical nuances of Sri Nath Sect, - came to be practised, singly and collectively. Consequently all pervasive vital energy and power, which otherwise remain hidden and unexpressed, began manifesting themselves and taking over the entire environment of the monastery. Inspite of being so close to physical grandour, and authority over men and resources, Sri Subha Nathji remained simple, unattached, unconcerned and away from the pompous display of arrogant superiority. Inwardly he was completely free of lethargy and negligence. The worship of godness of learning, infused in him subtle erudition alongwith a flare for rendering of devotional music and songs of the nirguna nath. The sayings of the NIRGUNA saints like Gorakh, Kabir, Bhaninath etc and their recitation and rendering inspired a unique emotional upsurge of devotion in the inner most core of the audience. His aptness in matters of introduction of VANIS, SABADS and songs in the whole night sessions was very much appreciable. He was a very good and efficient scribe; records in the archives of the monastery are the proof. Service to people was a distinctive item in the repertory of the Asrama. Ardent pursuit of self-realization, in keeping with the conventional norms of the asrama, acquired a wholesome state with the addition of the concept of service to the people. Spiritualism covered both the aspects - the mundane and the divine. His routine in the asrama consisted of the worship of deity. Arti in the periods of the day, prayers, supplication and service. He was also entrusted with the duty of welcoming the guests - VIPS and commoners- and looking after their comfortable stay in the asrama. Many mendicants also visited the shrine and they too were meticulously attended to.Discharging these routine duties, he never lost sight of the goal of life, the realisation of the self, redemption of the karmaphala and the attainment of Kaivalya Samadhi during the span of life.

Journey to the Holy Places :

He journeyed to holy places situated in the far-flung areas of the country. He completed the pilgraimages to Jangannathpuri, Badrinath Dhama, Kedar Nath and Gangotri with great zeal. Beside visiting other holy places, he attended various fairs and congregations and gave away money and material in charity.

Investiture as the Head of the Asrama :

PIR, Sri Jyoti Nathji entered into Samadhi on Sunday, the first day of the bright aspect of the month Pausa (Corresponding with Oct.-Nov.) in the year 2011 of the Vikram era. On the occassin of the Maryada Samskar, the Sadhus, devotees, and the followers of the Nath Sect gathered in large number and invested him with the authority and the status of Pir. He was of 43 years at that time.

Development of the Asrama :

Due to his ability, incentive and vigor the asrama developed immensely under his leadership. In cleanliness he perceived closeness with the Brahman. His art of living and skill of performing and executing reflected in the routine of the Asrama and resulted in its all round development. On account of his flair for cleanliness and beauty, the asrama became an ideal place for living and performing Sadhana. It was and is a heaven on earth. His sense of cleanliness inspired zeal for Indianness and Indian culture. Spiritualism reflected itself in the cleanliness of the ašrama. By the touch of his fervor blocks of rocks acquired the status of a temple of God and the dry sandy tract became the abode of gods in the form of an asrama.

The creative imagination of Sri Subha Nathji played a vital role in the improvement of the architecture of the asrama. His concepts expressed themselves in the forms and the designs.

1. He got a sanctum erected at the place of the Samadhi of Sri Jyoti Nathji in the year 2015 of the Vikram era. It was also embellished with marble. It is a reflection of the top of the sanctum dedicated to the memory of the ascetic extra-ordinary.

2. Residential apartments were constructed in the asrama. A spacious platform was built in the courtyard which added to the grendeur and utility of the area. The Sadhus, visitors and others can use it according to their needs. Night sessions of the devotional music could also be held on it.

3. Formely, there were no bath rooms for the visiting gentry. The need for such a facility was felt and to meet it, bathrooms were constructed. They were fitted with modern equipments. The construction and the facility of the bathrooms reflects the earnest desire for service of the people at his heart.

4. A shed for the cows was also provided. The shed was flanked with rooms of utility.

5. The well of the asrama was rebuilt to meet the needs of the garden. It was connected with the garden. The asrama become more beautiful.

7. There is a historical place called Dualatabad. The sage had a great interest in that village.The villagers entreated the sage for help and assistance.The generosity of thesage resulted in the construction of a templededicated toLordSiva. Religious people were greatly benefitted with the temple. A whole night session of devotional music and songs was organised as a part of the ceremony of consecrating the idol.