His teachings can be summarized into four cardinal principles:
1. Food culture should be reformed and rectified.
2. Natural way of living should be practised.
3. Perfect celibacy and stringent discipline of the sensual tendency.
4. Practice of Sahaja Yoga.

Yoga is the only practice or science, which can establish the self into its true state. This is possible only on the foundation of sound food culture and sound life style.

So far no one could discover such an easy way to health-promoting food technology as he did.Only Amritnathji descended on the earth with the vast knowledge of foods, their effects on the body systems and their efficacy to promote spiritual advancement beside the health of the mind and the body taken together.Revered Amritnathji was a pioneer of the science of spiritual and physical health through improved food technique and saviour of mankind who, time and again,cautioned against the evil effects of the prevalent food habits.

He placed before the people the essence of knowledge which can accord lasting peace at all levels of corporate social structure and can promote, lasting harmony of body, mind and soul, thus paving way for the spiritual bliss on largest possible scale of consciousness on the planet. This is his novel discovery based on experiments on his own person. Thousands of his followers lived up to his teachings, gained experience, enriched their lives and enjoyed the bliss of spiritual and physical well being. He recommended light, early digestive food and the food with cooling effect on the body.

The views of the revered guruji on Yoga are not based on the books on Yoga which are currently used these days. The views of the revered Guruji are revolutionary, but they are tried, experimented with, and fruitful. There is no place for any doubt. In the medieval period the rulers and the authors treated the Yoga as a difficult philosophy and presented it to the common man in extremely difficult way. This attitude did a lot of harm to the society and the life. The result was that the people, who were adherent of the path, became extinct. The environment of fear and doubt was created to distract us from our valuable trust and inheritance. The common people took it that the Yoga was not practicable, especially for a householder. They got disinterested in Yoga, rather detested it. This was the misfortune of the people and the country. 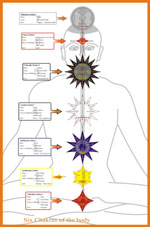 The holy sage carried out an intense research in the Yogic way; he experimented with the techniques, performed severe austerity and penance; he drew inferences out of the entire process and distributed the knowledge to the people; with a hope that the endeavour will help the restoration and resuscitation of the lost knowledge. The contribution of the Holy sage toward this programme will go a long way in the annals of the spiritual history of this country to revive the yogic knowledge and its pursuance from the oblivion.

The yogic world was infested largely and extensively with rodents and thorny bushes. The Holy Sage cleared the forest and introduced the Sahaja Yoga, the straight, practical and easy way for all and sundry. The inquisitive lot can do immense good to itself with the help of Sahaja Yoga. But according to the Holy Sage, Revered Shri Amirt Nathji, no method will bring success or bear fruit till the food culture is rectified and modified in accordance with his teachings. This is without doubt.

According to Amrit Nathji one cannot achieve self-realisation and lasting spiritual peace without unfaltering celibacy and it is impossible to remain celibate without rectifying food habits and life style.

According to him in Sahaj Yoga, one needs to first rectify his food, preserve semen and concentrate on the breath which rises from the Manipurak Chakra at the navel region, journeying through the Susumna in the spine reaching Sahasrara Chakra and return to the navel region by fixing sight at the nose tip. Susumna is the basal foundation of the breathing system; it runs through the spine and assumes the form of a wreath, a garland. Absorption in susumna leads to enjoyment of the self by the self and through the self. The mind's journey can be brought to a still state. Atman or cosmic self, the Vishwatman, reveals itself alongwith all its powers and splendour.

Yoga- the accomplishment of Sahaja Yoga, is the perfect state of fulfillment. Without achieving this, one should not talk of Vedanta; it would mean verbal churning of falsehood.

The Holy Sage has revolutionary ideas about the postures i.e. Asanas. He says the postures themselves do not give peace of mind. They are useful only to keep the body fit and healthy. Only Siddhasana and Komal Padmasana are benefical for the practitioner. Mainly Sukh Asana the posture of convenience and ease is the best.

The gains and the forms of the Pranayanamas as told by him are practicable, reasonable and easy to practise. The old belief was that, Pranayama means holding the breath. This is unnatural, strenuous and dangerous. This is the view held by the Holy sage.Spiritual bliss can be experienced while breathing evenly at the rate of 15per minute. This is an obvious fact. To hold the breath unnaturally and expect some spiritual gain is not a practicable idea and is based on ignorance too.

d) Six Chakras in the body :

He delineated the six nerve centres, existing in the human body. His description is based on his personal perception and experience. His account is slightly at variance from the account given in the old books. But, it is reasonable, rational and can lead the sincere practitioners to their direct perception. The powers and accomplishments, described and referred to in the books on Yoga, can be achieved through the six nerve centres as described by the Holy Sage Sri Amirt Nathji.

The description of the Kundalini power and its awakening, as given by His Holiness, the sage extraordinary, is rational, practical and natural. According to him Atmanand, the spiritual bliss, can only be realised by way of drawing the outgoing tendencies in and focussing or dedicating them all to one point - the Divine, the Introvert Awareness. The experience may lead to enjoyment of spiritual bliss which cannot be derived from any other source- sensual, material or psychological. Immortality can be achieved, the droplets of immortality nectar can be tasted not through the medium of the sense of touch but through the self and by the self. This is known as gathering the Surati, the outgoing tendencies, on to the one which lies within. The outgoing tendency is the Kunalini, the female snake.

Susumna is the basal foundation of the breathing system; it runs through the spine and assumes the form of a wreath, a garland. Absorption in susumna leads to enjoyment of the self by the self and through the self. The mind's journey can be brought to a still state. Atman or cosmic self, the Vishwatman, reveals itself alongwith all its powers and splendour. Without achieving this state all talks of samadhi makes no sense. Jivo Brahma Ev Naparah. Jivatma is nothing but the Brahma itself.

His idea of Samadhi is very revolutionary and unique. According to him the real Samadhi is one which does not reverse to the former state after it touched the apex. This samadhi merges the self into the reservoir of the bliss of atman and the practitioner is emanicpated from the psychic residue of infatuation for worldly pleasure.

His Holiness, the revered sage, Shri Amrit Nath ji has described three kinds of Samadhis:
1. Bhakti Samadhi, the devotional samadhi
2. Yoga samadhi, which is attained as a result of the Yogic observance and
3. Jñana Samadhi.

Jñana samadhi and Sahaja Samadhi are one and the same; when this samadhi is realised, there is no trace of yoga or meditation. The self which used to be a manifestation of the faculties is no more the same; it assumes some other quality which is non-quality too. In this state there is no occasion for duality. There is neither one nor two; there is of course a great vast void. There is no heaven, no patala the world, nor the earth. There is no karma- the action, nor karta the doer. Such is the knowledge of Sri Amrit Natha.

The bad luck of the country and the Indian society is that for the fear of the troublesome and tiring effort in holding the breath and mind of the people has moved away from the pursuance of Samadhi - a noble practice. They have been deprived of the excellent result also which the practice must have produced. I declare it openly that for samadhi, holding of the breath is not at all required. Those, who say so, have been led away by the miscreants whose aim had been to mislead the nation. Time has come that the error must be rectified.

Some persons use the Samadhi for earning money. This is a bad practice. I clarify that Sahaja Yoga and samadhi are one and the same; rectification of food culture, celibacy and absorption in process of breathing, that is all.

The mind does not roam from subject to subject or the source of satisfaction; it dwells in the place, which is absolute. This is Sahaja Samadhi. This amounts to a state called renunciation.

It is the power of Karma that impells one to take to the path of Yoga and the one to the ways of luxury and indulgence. As a consequence of the Karma, Brahma, Vishnu and Siva incessantly perpetuate the process of creation, preservation and annihilation. It is the power of Karma that makes one Monarch to the accompaniment of various instruments of music; it is the power of Karma that provides him with the arrays of horses and elephants and places a crown on his head. The holy sage Amrit Nath concludes that Karma is supermost; it is the result of Karma, its power, that an inspired practitioner of Yoga finally enters into the Samadhi, the state of final extinction of the fire of life and its merger into the supreme cosmic consciousness for ever, having no trace whatsoever of material, sub-material or supra-material Karmic existence.

It is the power of Karma that pushes one into the condition of a beggar and creates the couples of males and females; what the Vedas and Puranas contain as the essential truth is the gift of Karma; the power of Karma creates the four divisions of the society of the Hindus and it sends the souls into the body incarnations, once and again; all this it does with the force of ignorance. The power of karma generates the spirit of Dharma, the virtue, the piety, and it also causes illusion.

There may be grief or happiness; there may be virtue or sin; there may be birth or death; there may be a person, opulent or pauper; there may be doubtful or doubtless; there may be somebody, far away or in the lap, everywhere there is the trap of attachment all around. May he be father or mother, may she be a wife or may be a son or brother; may be a servant or a master; may he be a friend or a brother-in-law, may it be the earth or the other world or the sphere of death, they do not die with the death.

The Holy sage Amrit Nathji says that only He is true, the manifested truth; rest is botheration and falsehood. Dwelling on the significance of the spirit of detachment and sacrifice, the Holy sage, revered Shri Amrit Nathaji says that one should give up or renounce the attachment with worldly things, positions of importance and power; one should take to the ways as suggested and shown by him.